What a weekend this turned out to be, everything went to plan with an early flight from Manchester to London City Airport. The Docklands Light Railway dumping us at Bank right in the middle of rush hour. There had been a derailment on the Central line the day before so it meant a change of station.

We made our way to the Hotel and left our bags as we couldn’t book in until 2 pm. The hotel wasn’t too far from Hyde park so it was time to see the sights and walk the Prologue course. There were Tour De France support vehicles everywhere, the logistics of hosting this event must be huge.  A lot of the Prologue Course was already closed but traffic was still going down Constitution Hill, well it was untill the Changing of the Guard. Everything stops for this. Nothing passes, no one crosses, it’s a slick well organised event. 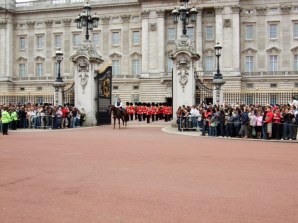 With the changing of the guards over it was time to have a look at the finishing line and then walk up to Trafalgar Square to see what the venue was like. It looked good, mind you the whole place looked fantastic. Back to the hotel to book in then out to get a place at the presentation. Now they reckon there were 60,000 there for the presentation I wouldn’t know if the numbers are correct but it was packed.

Ken Livingstone and the Mayor of Paris opened the evening up with a good speech, reminding us of the anniversary of the tube and bus bombings and that an event like this meant that they haven’t won. That led us to the presentation of the teams.

Now Discovery have changed their kit with the blue being replaced by green. It looks really good, the bad news is I can’t get any of it. It’s supposed to be about the team going carbon neutral. I’m of the opinion that AMD are set to become the main sponsor now that Discovery Channel are ending their sponsorship.

The screens they put up were cystal clear the camera puts a moire pattern on them.

Every team got a rousing reception and it made for a great evening, took loads of pictures and I’m still working out the best format to display them on the site.