Monday: Morning Spinning class at West Kirby, had a good go and took it up to 180 BPM at the end. Gym afterwards for nearly two hours. Had 45 minutes on the cross trainer which was 500 calories and intervals of 200 and 300 watts.
Watched the Team Pursuit on the flatscreen TV, awesome and another gold medal.
Rowing, 2000m half way through I remembered I’ve done this in 7:52. Well outside that so I had a go for the last 500m to peg back the losses. 8:50 nearly a minute down. Fell off the pace for the last 250m. Side stepper was about 350 calories.
Weights, shower and home.
MOT the car in the afternoon and out on the bike if it passes later. A two hour ride should see me around the Wirral. Well the car passed so it was off to Deeside for a a look at an all singing dancing Turbo trainer. They’ve stopped doing them.
Spoke to Chicago while I was there.
They had carbon fibre Raleigh’s for £800 (I think) which is an unbelievable price. Campag equiped it looked clean.

Throwing it down when I got out so it was off the Cheshire Oaks for Cycling Plus and a browse of the mags. Ended up buying another Fuji camera, now 12 megapixels for the same money.

Another class at West Kirby in the Mapei kit as I’d run out of Disco Kit. Another shower and home.
Tuesday: Booked a 9:30 class, leaves the rest of the day free. A chap comes in taking his mums ride not knowing what he had let himself in for. Bet he doesn’t go back home and say he got wasted by a class full of women.
Watched another great day at the track. Wrote a CV and sent it off so I could be on the move.
Wednesday: Ride day, last one before the Wild Wales.
Rode out to the Eureka wondering what to do not having had a decent ride since the Audax. Plenty of Spinning but no rides and spinning isn’t riding.
Went out with Carols group and and at one stage there were 14 of us heading out to what I thought was Delamere.

I was playing tail gunner, we had a little split at Cheshire Oaks where Lisa and myself got delay at the turn due to traffic. Caught up with the group a little later but there is a fair distance from the front to the back of a large group and the front doesn’t know whats happening at the back.

We went through Kingsley where Lisa went of the back again as she doesn’t descend too well, I was in no mans land watching the group cycle off into the distance but with no sign of Lisa having made the first turnoff.

It wasn’t until a gate at the River Weaver that I caught up and was able to tell the group.
Carol, Lionel and another went back. The rest of us continued on to the destination at Acton Bridge.

This was us crossing the River Weaver and the canal. Really nice for cycling around here and this was all new to me. 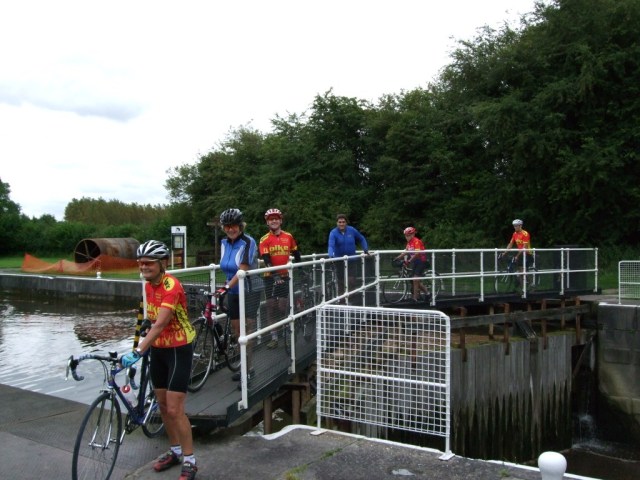 Now we ended up at a Cafe where a F.E.B with chips was the order of the day. I’ve had mine at the Eureka so am looking for something that isn’t going to pile on the pounds.
Jacket with Tuna springs to mind and I have got to give credit where it is due they ask me if I want Mayo or butter. It came with neither and was just right.

The sun came out for the ride home and Lionel had joined us once he got passed the Swans and cygnets on the above lock gates.

Les struggled on one of the climbs on the way back, if you think you are having a bad day there is always someone who IS having a bad day.  Fairly straight forward once you know the lanes.  Once back at the Eureka we are wondering what had happened to Lisa for her to turn up 20 minutes later. She had gone to the ICF and made her own way back.

Home via the missing link and I even managed to put 0.2 mph onto the average to take it up to 15 mph.

Gym at West Kirby and managed to get the last bike on the Spinning class. Hot class and I’ve got a woman who looks like she is training for a triathlon next to me. The two girls behind are on their second class , which is good as many don’t make it past the first.
Shower and home to round off an even better Great Day.
Thursday: Work. Keep the site up to date. Picked up Cycling weekly on the way home. Really good press for the track successes. Tending to downplay expectations  when the training results seem to see us on on top form on a regular basis.
Gave an analysis of the funding and it was significant it the track success.
Part of that success is that ordinary  Joe’s like me can have a go for the princely some of £12 including the bike.
For this you get the basics of now World Class coaching. It struck me as highly disciplined right from the start. You did as the coach told you or you were out of there. Not quite decided on whether to go for a pink slip yet but Northend club nights may suffice.
Friday: Work. Home and sort the bike out for Sunday as there is going to be no time tommorow. Finnished the route at 11.30 pretty sure this is the right route, it’s took me long enough. Just had a look at the Google Earth link, absolutley stunning. The full route from a helicopter.
Saturday: Work.
Sunday: Wild Wales day, praying for good weather.