Not been out on the bike  for about 2 weeks now, had planned to ride to the Ice Cream Farm on Sunday but a spell of snow on Friday put that idea on hold. Things might appear to be fine on the Wirral peninsular but the lanes in Cheshire are not gritted and any snow lingers for days.
A few years back 8 cyclists ended up in the Countess of Chester Hospital, all falling on the ice riding to the Christmas Dinners at the Ice Cream Farm.
It was still slippy in the car this weekend.
A fall is going to put you out of action for months.

Monday: Big push to get the kitchen finished , last  week was spent bricking up an old fireplace that revealed itself when the plaster was removed. Anyone that tells you old houses were better built is talking out of their backside.
The postman delivered a mouse mat from Dennis at CyclingtheAlps.com as he promised to give one of them to Paul at the Berlin Google Devfest they presented at.
The app is in the Google Chrome Store and is great, especially in Google Streetview.
I’ve also migrated to Google + , it’s everything Facebook isn’t or has become.
The cyclist Circle in my stream  features good posts, good pictures and no bad language.
Will be taking another look at the Garmin Edge pages as they can date really quickly.
Tuesday: Another kitchen day, might get to assemble some units later on, looking to get out on the bike later in the week.

Wednesday: Drove out to the Eureka for breakfast where Merseyside CTC were the only ones in the Cafe. Dave the 4 square Mayor turned up .
Saw some of the site stats last night and some are pretty mind blowing 193,000 since I’ve enabled the counter, god knows what they were before that.

Picked up this link from the excellent Cycling the Alps site.

Friday: Picked up an infection, mind you there was no way I was going out in that rain.
Called in at Vita Cycles and saw the design for the new kit. Looks good especially after all the fun and games on FaceBook in the past few days. 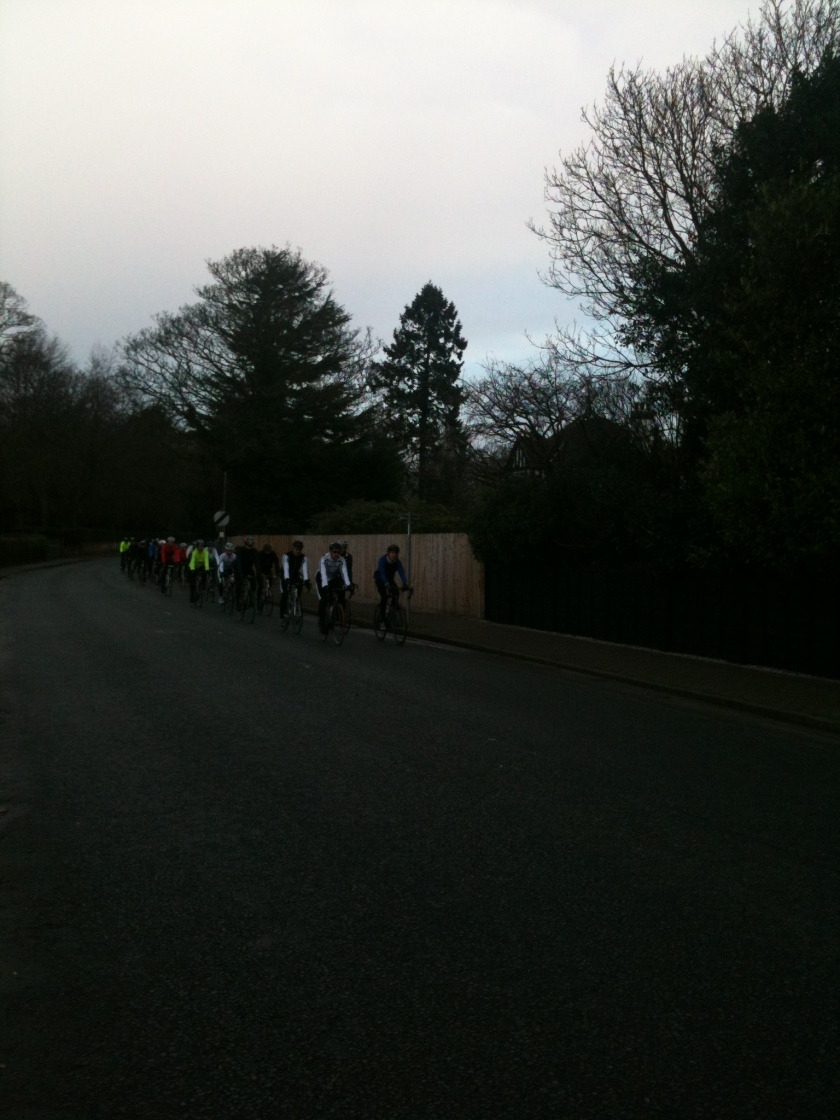 The plan for Christmas Eve is for a short ride out to the Eureka Cafe and maybe a bit of last minute shopping.

I’d been on Twitter looking to ride out to the Eureka with a few of the Vita guys meeting them on Route 56 at Thornton Hough and had a thirty minute wait as I’d got there early. I’ve got to admit I didn’t expect nearly 30 to turn up.  The ride split at Willaston where Ian and Dave opted for the Missing Link, I followed and thought that was it but joining the Chester High road another small group had followed us.
Could be the start of something, the group was too big to manage from the front and the elastic band effect was happening at junctions. Those on the back have to chase hard to get back on the group.
Should be alright when a couple have some ride discipline knocked into them, like easing up after a junction and singling out on the narrow bits.
It looked to be the largest group to turn up at the Cafe, Weaver Valley turned up as we were leaving.