Found out there is also a 100 Coursepoint limit too so might have to put this page on hold until it is sorted.  22 Oct 2008

The 100 Coursepoint issue still hasn’t been resolved which is a pity as it had the opportunity of really opening up the 705. One thing that has come up is where to save your courses. To Save multiple Courses you need to save them to 705:Courses, memory. Do NOT save them to the SD card, it will not be seen.

Ignore the rest of this post as the 100 CoursePoint Limit applies.

A lot of you have difficulty with the Garmin 705 100 waypoint limit when planning a Route.
There is another method that uses CoursePoints and you riding a Course.

NEW This post is also relavent to the 305 as there is no difference between the two.
You ride the same trackpoints on both devices, just on a 705 you have a map to look at.

You could add the CoursePoints using the TrainingCenter once you have anything better than the PCBasemap loaded. Far easier though is to plan your Course using BikeRouteToaster.

CoursePoints are the inbuilt Icons in your Garmin but they have been hard to use as  TrainingCenter is not a Course planning application.
CoursePoints have similar properties to Waypoints in that they bleep when you arrive at one. 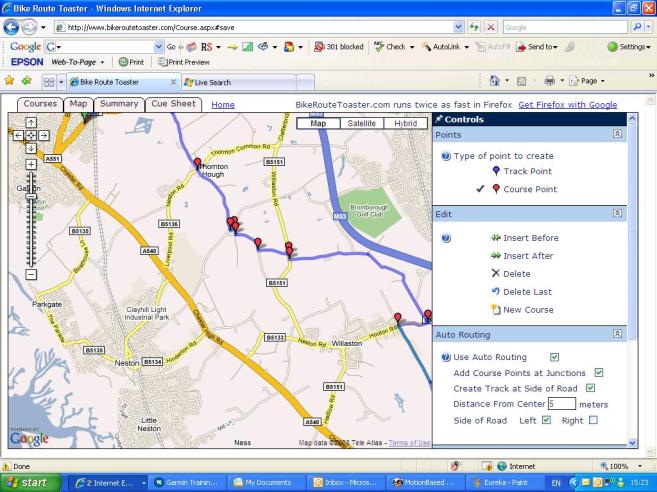 With CoursePoint and AutoRouting selected in BikeRouteToaster you will have the correct turn direction added at every junction. If you tick the coursepoint warning on the summary page your going to get a warning of a turn coming up rather than it being right on the junction.

Just to try it out I went off course and waited for the warning. It came about 50 yards from where the turn was.
You’ve another two screens to view when riding a Course. The Course Data screen has time and distances to the next CoursePoint along with the turn direction Icon so you know which way you are going to turn.

Registering with BikeRouteToaster allows you to save your courses and give a link to it similar to GarminConnect. Save your Course as a TCX file to your documents and put it in the Garmin Course folder on the removable drive.

To ride the Course you need to go into the Training section of the 705 and it will be under Courses. Don’t forget to press start as well or you won’t be logging anything.

Pictures of 705 screens to follow.  They will follow when I can get the macro setting on the camera to work so it will be a while . 21 Jul 08.

For planning a Course with CoursePoints as your turn indicators BikeRouteToaster is by far the best out there. It’s a pity Garmin can’t provide decent Route and Course planning software as it is all about making these devices user friendly not user unfriendly.

04 Aug 08 Rode my first Audax as a Course yesterday and it went quite well once I’d remembered to press Start/Stop a couple of mile down the road. For some reason I didn’t get CoursePoints on the second half of the ride but it is definitely the way to go.

There has been another software upgrade for the Edge that gives you a new screen to play with while riding a Course and fixes a few more issues.

Had a comment off Dave F which deals with planning a Course offroad.

Frank,
Now you have suggested saving bikeroutetoaster (BRT) as a course (.tcx) and accessing it through training, I have had much more success off road. I use BRT with autoroute “on” to get me to the start of the offroad section, then using a high scale map (paper or electronic) and switching BRT to satellite view and switching autoroute “off” I can place trackpoints and course points as appropriate to indicate the course on the satellite image – the paths are visible if you look at the map to get the direction. Then once back on road, switch the BRT autoroute back “on”. I hope this makes sense, I previously tried using this method with the .gpx format but I did not find it successful.

This method also works for city centre cycleways that BKR does not know exist!
Thanks for the help.

Thanks Dave, the latest Google Maps seem to have a better resolution that now allow planning offroad. You can even see the chairs and tables at the Eureka on the picture above along with the Mini’s at the Mini Centre at the crossroads and all for free.