Now this is the third and final TLI Oulton Park Road Race for this year. I’ve done the first two with mixed results if a result is finishing in the group. If competing and doing your best is a result then I’ve had the best results of my life over the last month or so.

On the last event I was shelled off the back due to a lack of experience and once off the back it can’t be regained.  More than one has told me how competitive the Vets are, I think it it a mixture of race experience and years of just being at a fitness level I didn’t know existed.

For this week I’ve had a wheel upgrade to unbranded carbon rims and tubular tyres.They are not Zipp,s Hedd,s or Corimas  but most of this like weightloss is in the mind. I know now that I am fighting the law of diminishing returns, the only thing limiting my performance these days is me.

I’d been lining up for this event for a week and the weather forecast was mxed. I’d spent a day trying to get cork brake pads for the carbon rims with no result. This had worn me out before I’d even started. Anyway I’d signed on in good time and spent some time circulating the wet carpark. 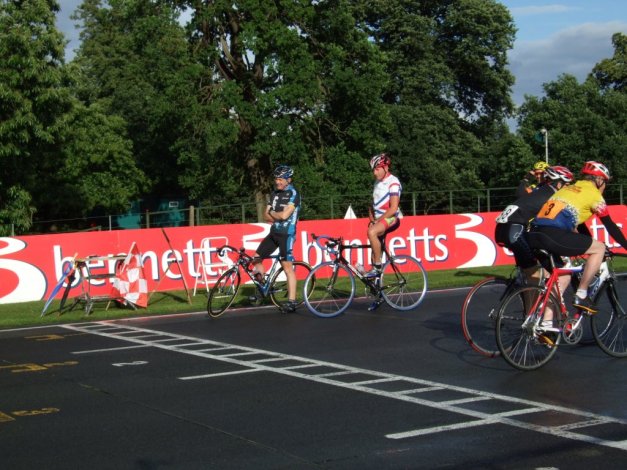 This is moi talking to Chris who is about to flag us off. The funny thing is Chris was talking to me me about this website, he’d found it on a Google search.  TLI Oulton Park I think. The thing was we were talking about helping someone else maybe with a spinning class. I’m really glad when events like this happen as I don’t actively seek to publish (other than this blog) what I’ve acheived. Just being able to take the line is an acheivment for me.

And so to the event. Chris gave us good warning about the standing water at Old Hall and with that we set off down Deer Leap. Unlike last time I was taking my time letting others take it up this week. Just like the other week there were loads of bunnies running for cover as the leaders came through.

Mixed results with the pictures this week, there are a lot of blurred ones as the camera prefers to focus on stationary objects like the Bennetts hoarding on the armco.

Now I know where I went wrong last week and I’m not going to make the same mistake week. There were times when I was tempted to go off the front as things slow up on various parts of the lap like Island bend to Lakeside. You are into a headwind here and no one wants to lead out here. At least I don’t this time, it was this part of the track that has been my undoing once too often.

The reason is the sprint up Dentons with things easing off slightly on the Avenue. Things picking up again as we head for the line. Now it was all about hanging on with the bunch tonight and not getting dropped again. I’d settled into things OK this week and once I’d realised that for me it was all about the climb up Dentons, where I was weak, at least it was giving me the opportunity to stay on the back.

I’d spoken with one of  The Sunlight guys and he passed comments about not wanting to be further back than this, looking back there was only one other rider behind us. That focused the mind but at least I hadn’t done anything stupid like go off the front this week. Last week I’d gone from the front to the back on Dentons and then dropped by Druids.

Link to Google map of Race

From the above data you should be able to gather that the last two laps were fast but my lap four was the fastest of the race. The last lap coming out at only 1 second over that shows I wasn’t blown at the end. Yes I’ve finished with the group this week but lets not forget I was riding out of my age group so respect is due.

Coming out of Shell hairpin and going along Lakeside the guy in front of me has a spoke break with a loud ping. He wasn’t aware of what was up at at the time but you could see the wheel was out of true. I’ve been warned off Mavics with alloy spokes and sure enough this was a Mavic Ksyrium letting go. 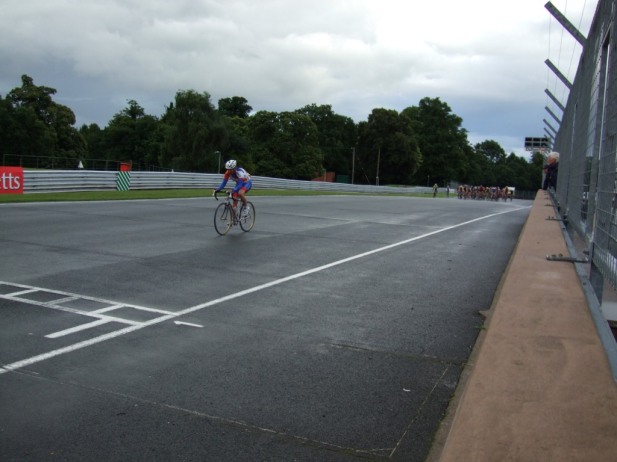 There are plenty of blurred shots of the pack going over the finish line so I won’t waste bandwidth putting the pictures up here.

I forgot to mention that I am riding Barry Sheene,s lucky number 7. It’s all about the last two laps as things hot up. On the 9th lap I’m consious about not loosing places on Dentons again but coming out of the saddle like most around me doesn’t feel right on these new bars. This time I get chance to here the bell as we cross the line for the final lap. This time up Dentons I’m at least holding position and after that I’m actually picking up a place or two. Dentons has taken a bit too much out of nearly half the field and it starts to thin out on the run up from Old Hall to the finish line.  I pull another few places back but no one is counting except me. 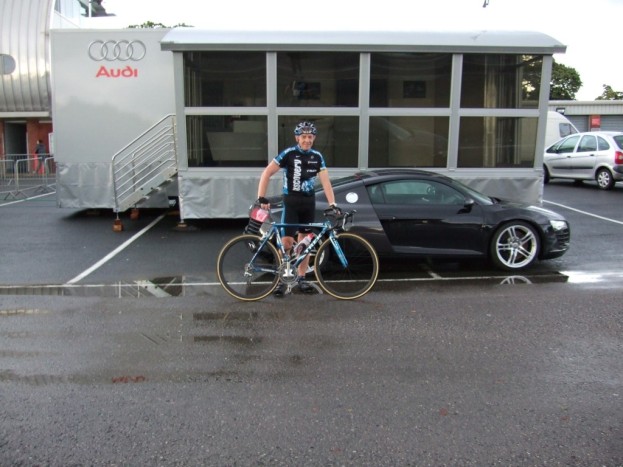 Now you may wonder why I am having my picture taken with an Audi R8, well the fact is something was going on at Oulton Park on this day and the pit lane was full of them.So much so that we wern’t allowed in the pit lane. There were 18 that I could see and at £82,000 for a base model before extras (and everything is an extra) that equates to £1,476,000 for a base model if that’s what they were.Nice looking car but a bit out of my league.

I bumped in to another Frank from New Brighton CC after this as his lad had won the last event and had been upgraded to the senior group. The group that managed to drop me after a lap!. In fact I bumped in to a fair few that I have come across since taking this up.

It’s been another great evening, thanks to all involved. I’m still on this journey of Discovery (there’s a pun in there). Finally, a year ago I didn’t ride with a group as up untill August I didn’t think I was up to it. A year before that I was trying to drop out of the morbidly obese weightclass. It’s hard to write the last sentence these days as I just want to look forward to the next challenge.