Third time I’ve ridden this event but the first time I’ve entered on the line. This proved to be a bit of a problem later on as I was riding a two year old Course.
It wasn’t until the day before that I realised the start had changed.

Phil was at the sign on again entering on the day, been on some fast rides with Phil and he’s looking for something else as the Chester Road club rides are faltering. He had some common sense and downloaded the Course off GarminConnect.

Phil told me about Stan having to cancel some of his rides due to lack of entries which is a pity as they are damn good rides.  Phil is looking for an early finish so stays with the club guys up ahead.
I fall off the back and start following the 705 course from 3 years ago. Climbed the switchback at Delamere Forest Ok and all went fine until I went down this lane to find it closed. No problem just carry the bike around it. Re joined by a pub further up the lane only to see a group I’d passed earlier come into view, so I’m going backwards. 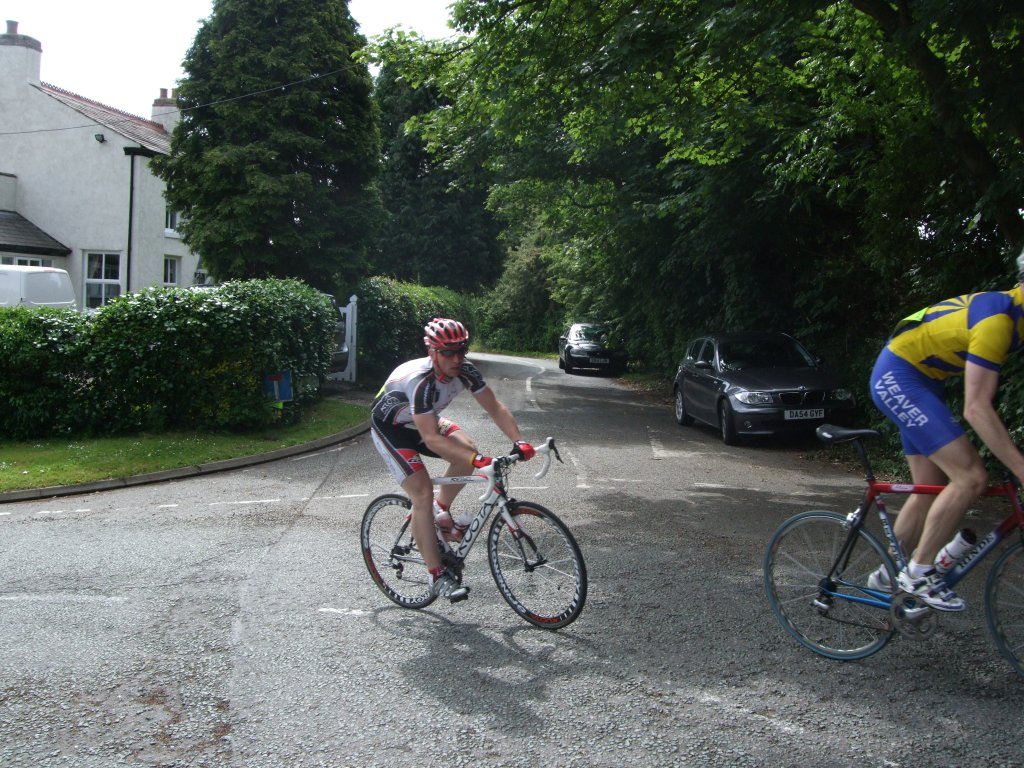 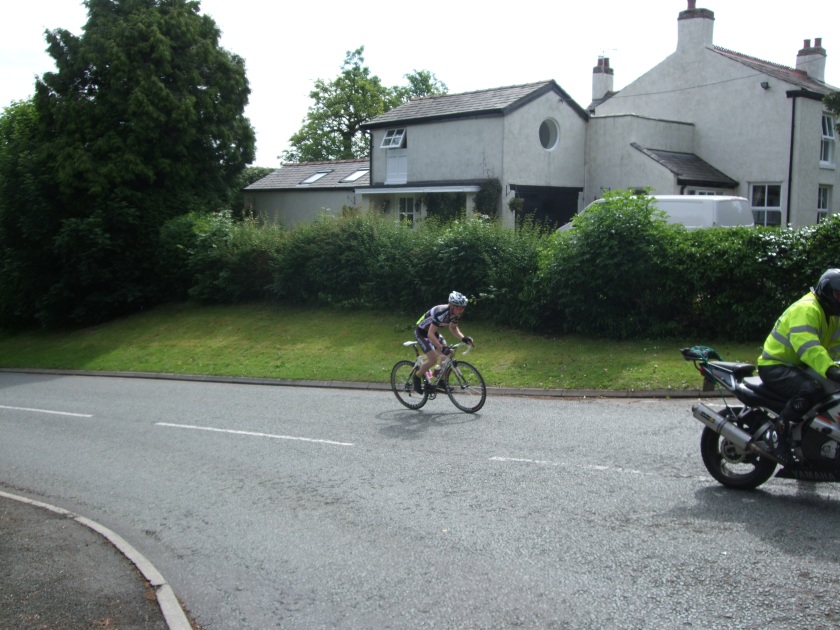 t Aldford Bridge we stop to watch the roadrace come through with the break at 20 seconds. The finish line is further down the hill, a small group of riders formed waiting for the race to go by and then it ws off to the first control at the Ice Cream Farm at Great Budworth. Pity they can’t make it car free but it’s been a nice ride up to now.

The control point had a voucher for tea and a cake but also had the dog above who would sit up and beg for food. Janet of the Two Mills section came in just as I was leaving for the next section up to the Wizard of Edge.

As I was following a previous ridden course I took no notice of the Road Closed signs again thinking I could slip through a gap again. This was not to be as the picture above shows. Beyond the barrier is a main railway line with no bridge so I had to follow the diversion signs.
This resulted in an 8 mile detour trying to get back onto the old course.
More worringly I had a major scare when a nutter overtook a long line of cars after a long section of double white lines. He must have been doing over 70 and I’ve got my head down on an empty side of the road.
Back on Course I finally get to climb up to The Wizard of Edge. The climb isn’t too bad once you’ve done it a few times
Lot,s of nice places around this neck of the woods, in fact the whole ride has been nice. 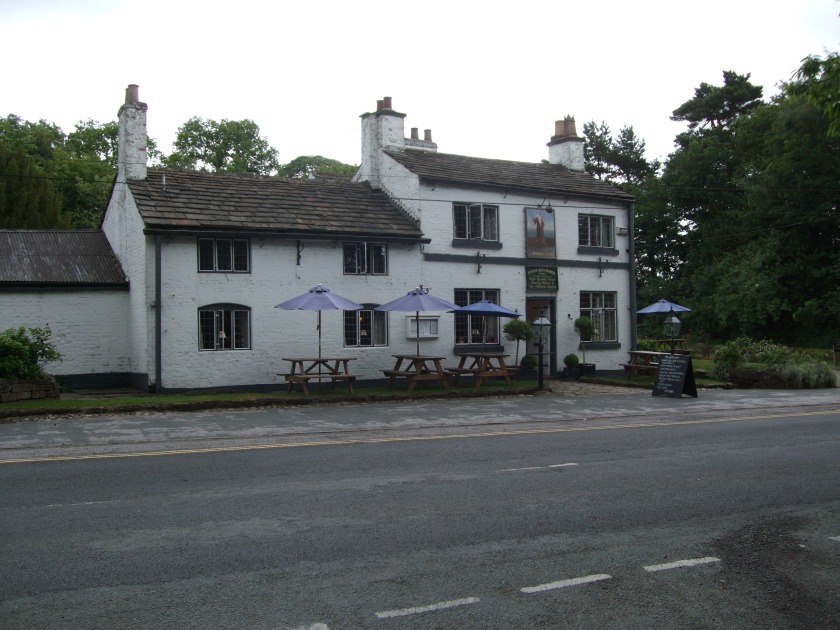 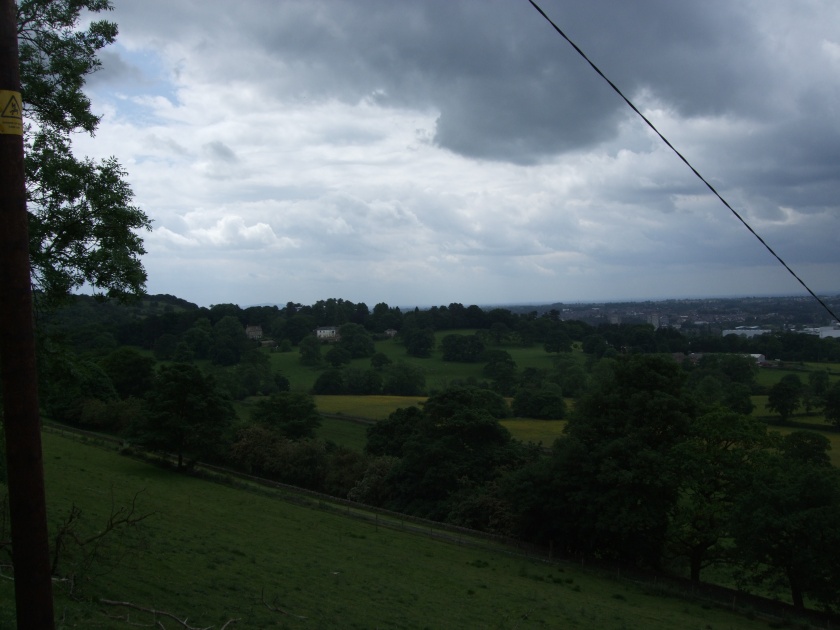 After the hill at Redway it’s all downhill so to speak. The next control at Scotswood Nursery. Here they couldn’t do enough for us, bacon barms sausage barms, cakes and tea.
No more pictures after this one as it started to rain and finishing became a concern.

A trip through Macclesfield down hill with a car on my tail the rear tyre became soft I finally stopped on an unmade section of road not wanting to cause any more damage.
It  turned out to be the valve parting company from the tube. The carbon fibre pump got the tyre up to a rideable pressure but isn’t great. Rain clouds  finally broke and the Aldi jacket got pressed into service.
It didn’t come off for the remainder of the ride. Before Lock 57 control I bumped into 2 riders coming the other way looking for a sign, turned them around as ths was definetly the right way. The bigger guy was getting dropped by his mate on the climbs.

At Lock 57 control the heavens opened and I resisted the Cafe as once inside you wouldn’t get me out. As it was I hid under the M6 for 10 minutes waiting for the rain to die off.
Next stop is the Jessie Hughes Institute at Eaton.  On this section the Gamin 705 started to play up. First it would Auto stop and then restart a second or two later. Then it lost the map for some reason but still showed the course which was just as well as the route sheet was a bit sodden.
No shoes allowed in the Jessie Hughes institute as cleats would damage the floor.I didn’t stay long as time was getting on and I left at 5 past 5 with the check closing at 5:30.

The others in Lock 57 aren’t going to make this control as I’d set myself a target of an hour to do the final 15 miles.  The route back goes around Beeston Castle and drops down to the canal over the hump back bridge that has been hit by a car. Everywhere is deserted with a steady drizzle to keep you company.
You can see the church at the finish a few miles away and hear the bells, I’m still wondering if the were real bells or a tape.
The stats 102 miles, 7 hrs 23 minutes, 13.89 average.
Data is still locked up in the 705 so no GarminConnect  link yet.
Thursday: Still trying to recover the ride data, got about 70 miles of it now. It has got me thinking about how quiet the roads and lanes are midweek or just generally.  Off an A or busy B road there is next to no traffic at off-peak times.  Most of my rides have been on deserted roads and lanes.