Monday: Work, a trip to see a dermatologist followed by a spinning class at the Oval.
Tuesday: Tex,s morning spin class, sorted the Garmin out by deleting the faulty .fit file. Not a problem with Garminconnect but it was a problem with TrainingCentre. Weights for about 15 mins bits around the house and a bit of cycling on on Eurosport. Booked Beckies 7 oclock class as the 6 oclock class was full. There were only 5 of us  in it. I felt a bit flat for this one. Bought a new pair of  Asics trainers to replace the Mizunohos. Not as stiff as the Mizunohos in the spinning class but it’s a start.
Wednesday: Decided to swap a ride day for a day working on the house. Watched the cycling and also downloaded the latest RealPeloton podcast which deserves a link. Carbon Stem in the post from China for silly money, the postage costing more. Finally found a use for Workouts in the Edge 800, logging a spinning class.  Shows Heartrate, Calories and Time which is all you need.
Thursday:
A windy ride out to the Eureka via Eastham and Cheshire Oaks Cycles. I’d started out going to the Oval to get my pin number for the Invigorate card only to find the computers down again.  It was quite pleasant going through Port Sunlight with quiet roads being the norm after rush hour and the school run.Walked through the door of the Eureka only to be told I was the first cyclist in, I had thought it was shut seeing no bikes outside. Use it or loose it.

Next Dave The Mayor comes in and we have a chat with Ann about other Cafes, banned riders riders on forums etc etc.

Dave has signed up for the Saturday Vita rides and this is what he is going to be up against, Sean,s new toy. In the light of the shop it looked a bit pink I kid you not.
Some really nice touches to it. Getting urged to go on the rides to give Sean a bit of competition. If it’s anything like the test rides it’ll be totally bonkers. 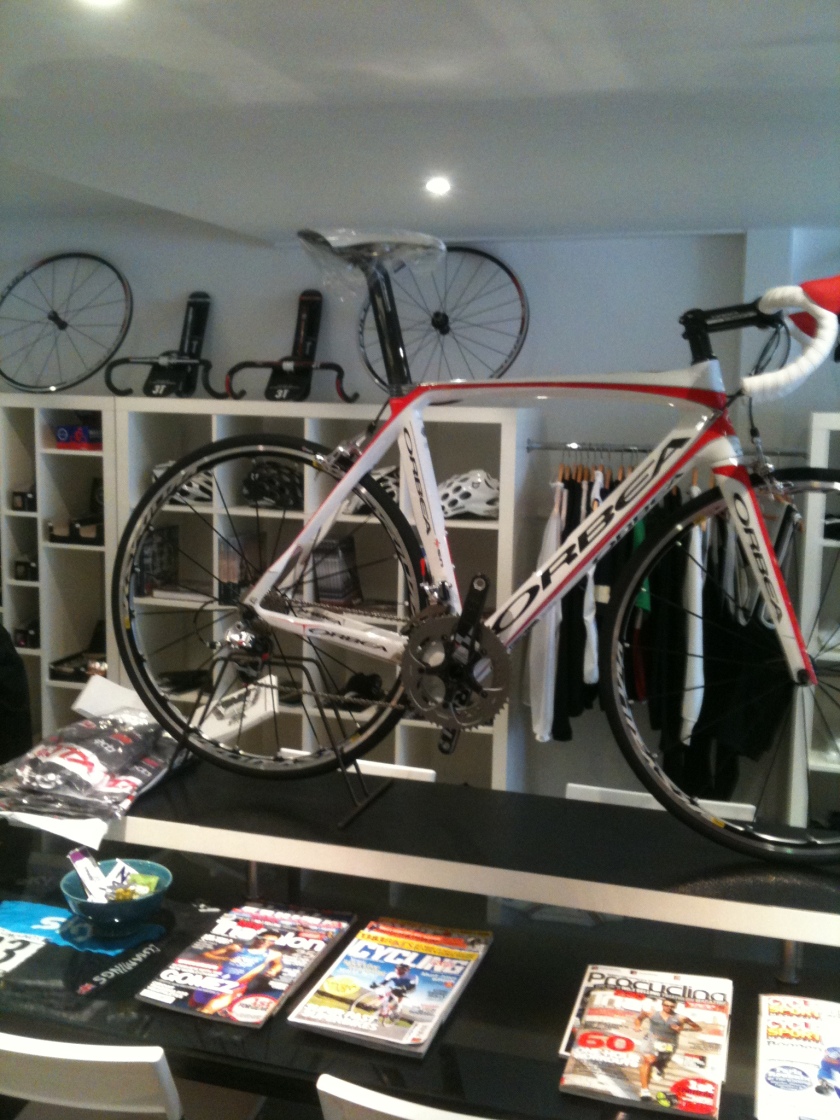 It’s really funny watching people come into the shop not realising what a decent bike costs. Some good deals on Kuota and Eddy Merx.  The shop is unusual that you can try the bikes out. It does pay off as they packed me off with two Fizik saddles last week after trying the fitting system.  Ended up with the one with a bit more padding but still saving 125 gramms over the Bontrager one. My backside is still getting used to it but it does offer support on the sit bones.

Morrisons again on the return leg with no local resident trying to take me out this week.  Back on the Hoylake front the wind had dropped and it’s turning out to be a nice quiet ride. Called in at Europa Pools to get my pin as Louises spinning class was forming a queue outside the room. It was mentioned in Beckies class that we would be doing 8 sets of 8 to Sandstorm by Darude and not by me.

As I’ve returned to spinning again I noticed a lot of newcomers trying the classes again. For God,s sake take your first one easy, your not competing agianst me or the rest of the class. Just aim to finish the class. If someone in the class is doing 140mph they are spinning a wacking big flywheel with no resistance and gaining nothing.
Conversly there will be other women in the class that have been doing it for over 10 years. Tex,s classes are known for being hard and that applies to the circuits too.  He’ll come around and stick some tension in if your not doing any work.
Bring water and a towel.
Chestpresses, there is a knack, if you whang 5 kg up and down on a weight machine thinking it’s doing you any good think again. This is a reduced bodyweight manouvre that needs some strength, you won’t expecting to be doing pressups in a spinning classs but they are part of the routine especially in the women led classes.

I didn’t win a nice Colnago on Ebay with the bike going for £979 against my bid of £25.
Friday: Tex,s spinning class at the Oval, now booked online. Looks like Barbara,s classes at West Kirby are fully booked up. A trip to Vals allotment had the poly tunnels wrecked by yesterdays wind. Took the Mini  back to Bathers for the puncture repair. Thank god I specified normal tyres and not runflats.
A trip around Birkenhead had me come out of Smiths with four magazine.
Then it was off to Europa Pools for Sheila,s spinning class. Sweated loads in this one for 400 odd calories worth. Shower then home.
An upload from the Garmin edge 800 had me doing 144.8 mph on yesterdays ride due to a fault with the cadence sensor.
Saturday: Work, but should be a good day for the Vita cycle ride.
Clicked on this link and found my Colnago Carbitubo in the top 100 and looking at the silly money some of it is fetching it might be worth rebuilding.
http://www.thamesandhudson.com/cyclepediacontents.html

Removed Daves dead link  to his Garmin basemap renaming so might have to do a page on that too. The Shwinn spinning bikes at Europa Pools are  a lot harder on you than the Precor bikes at the Oval. More robust too.

Just  found links from other sites about maps etc.  My current best advice is for a 705 use City Navigator on SD . For a Garmin Edge 800 , is buy  the OS map bundle. On NO account buy the old DVD version which is sitting on a lot of shelves, it is NOT the same as an OS map.
Updates are on the way, if something is not looking right post a comment and I’ll get back to you.