I have to hand it to the Merseyside CTC they continue to selflessly organise an excellent event that they don’t get to ride.
http://www.merseysidectc.com/
In the middle of Wild Wales no less.
Probably the toughest ride since the Etape in 2009 I haven’t done myself any favours by putting on 20kg and it shows.

The electronic tag sign in for the second year had about 600 of us on the road in a little over 15 minutes. This had the unforeseen consequence of the biggest queue at a control point I have ever seen with about an hour wait.

It defined the British and queues, orderly with no one pushing in except Zel of The Sunlight. Who I would class as marginal ;>) 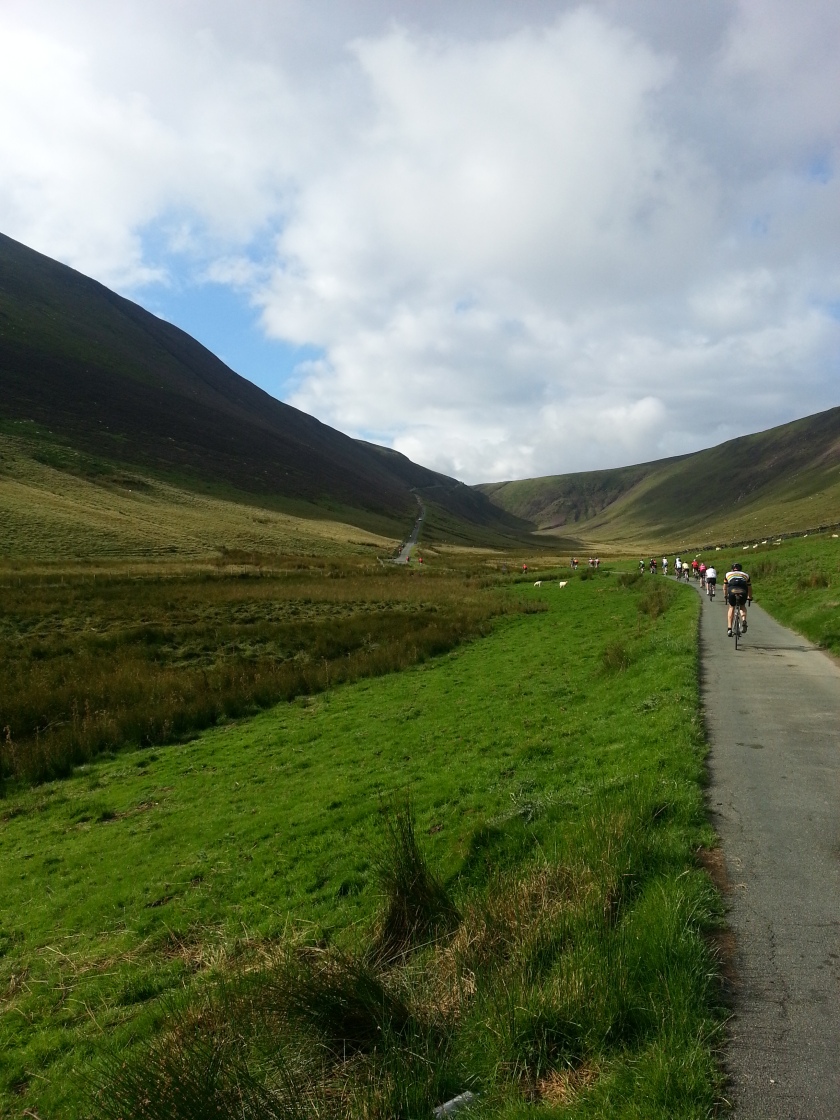 2.5 miles in after tagging on to a club doing 9.5mph across the lake shore we were confronted by the climb of the Hirnant. 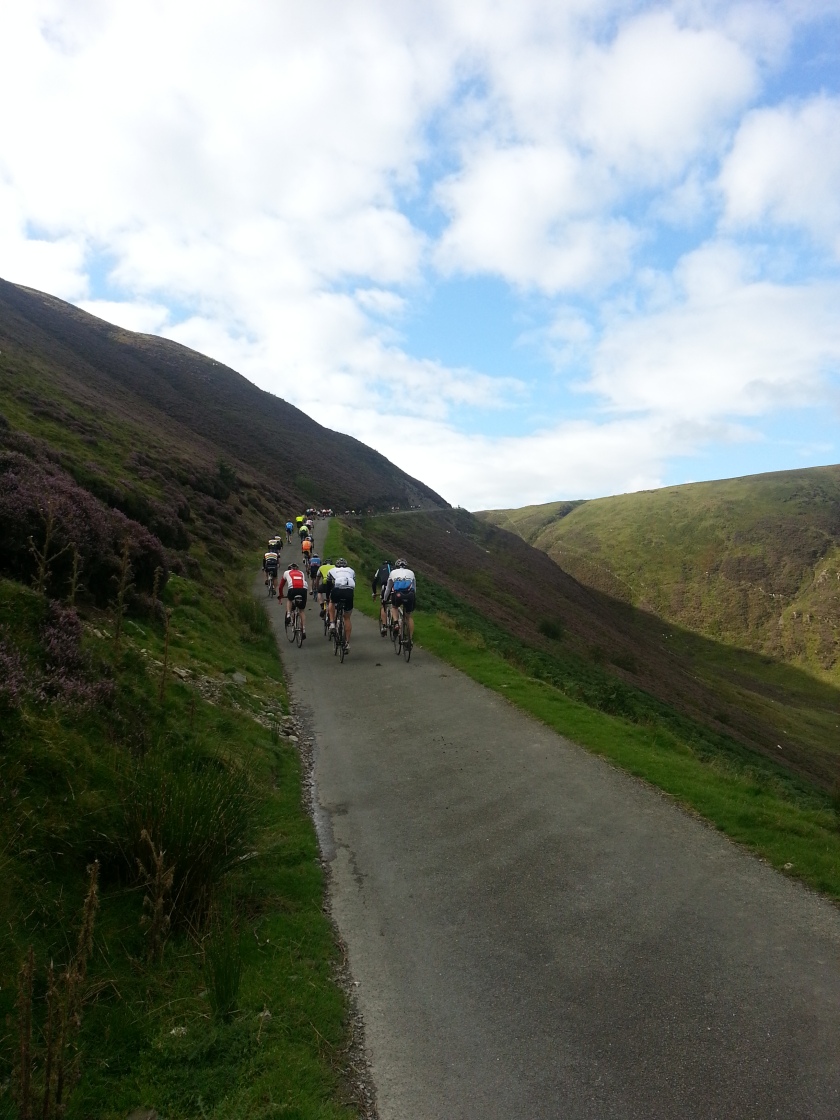 I’ve been shying away from hills since the Etape  and I’m about to get my come-upance.  That along with the lowest gearing I could muster, it wasn’t enough.

weight falls off. Expect a big increase in ride miles. 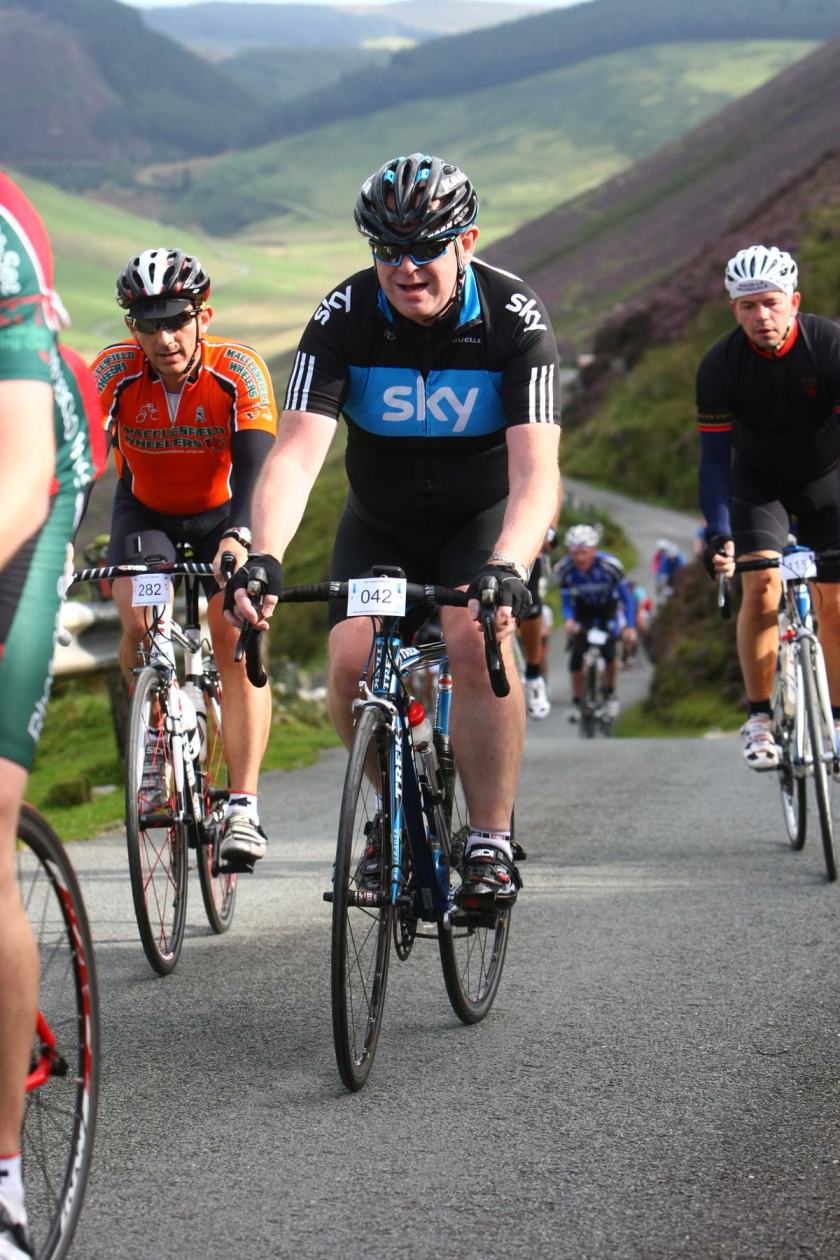 The Hirnant Pass probably defines the dictionary definition of a glacial valley.
Next up a fast descent to Lake Vyrnwy where I should have stopped to take a picture of the dam as it looked spectacular with water spilling over the weir. 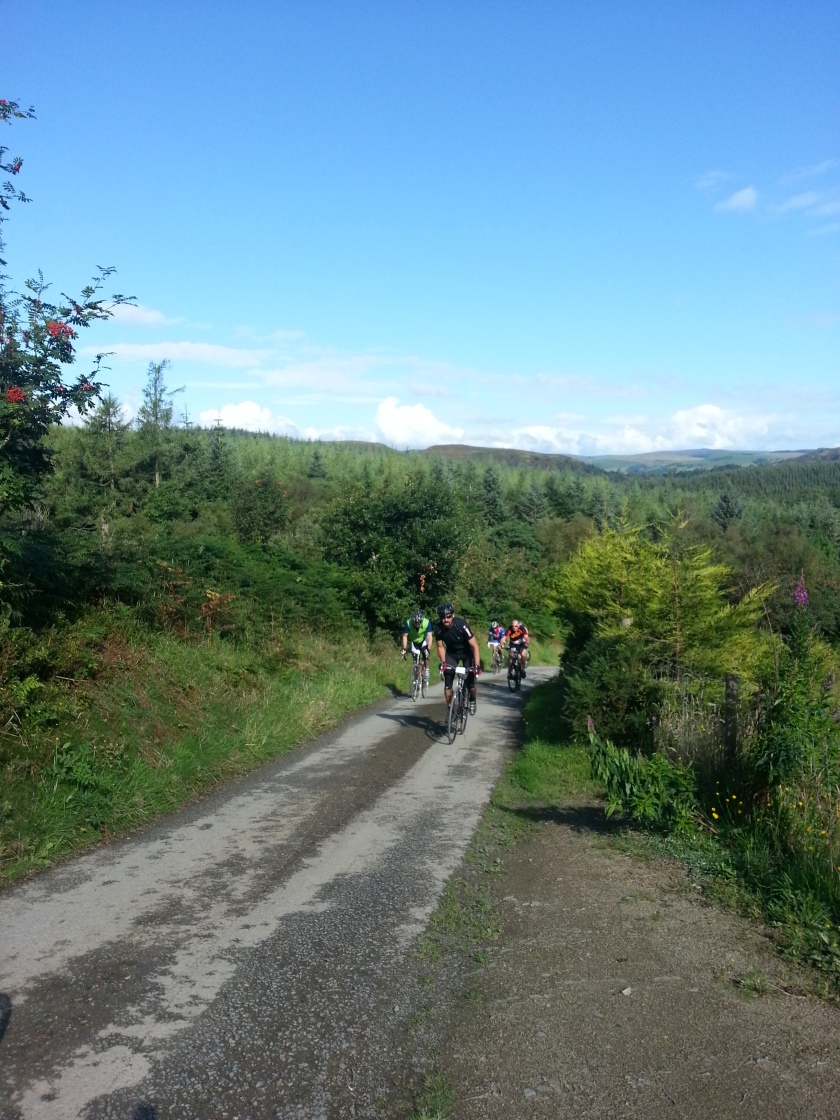 One of the features of the ride was it was almost entirely up and down, the only flat section being the ride along the lake. 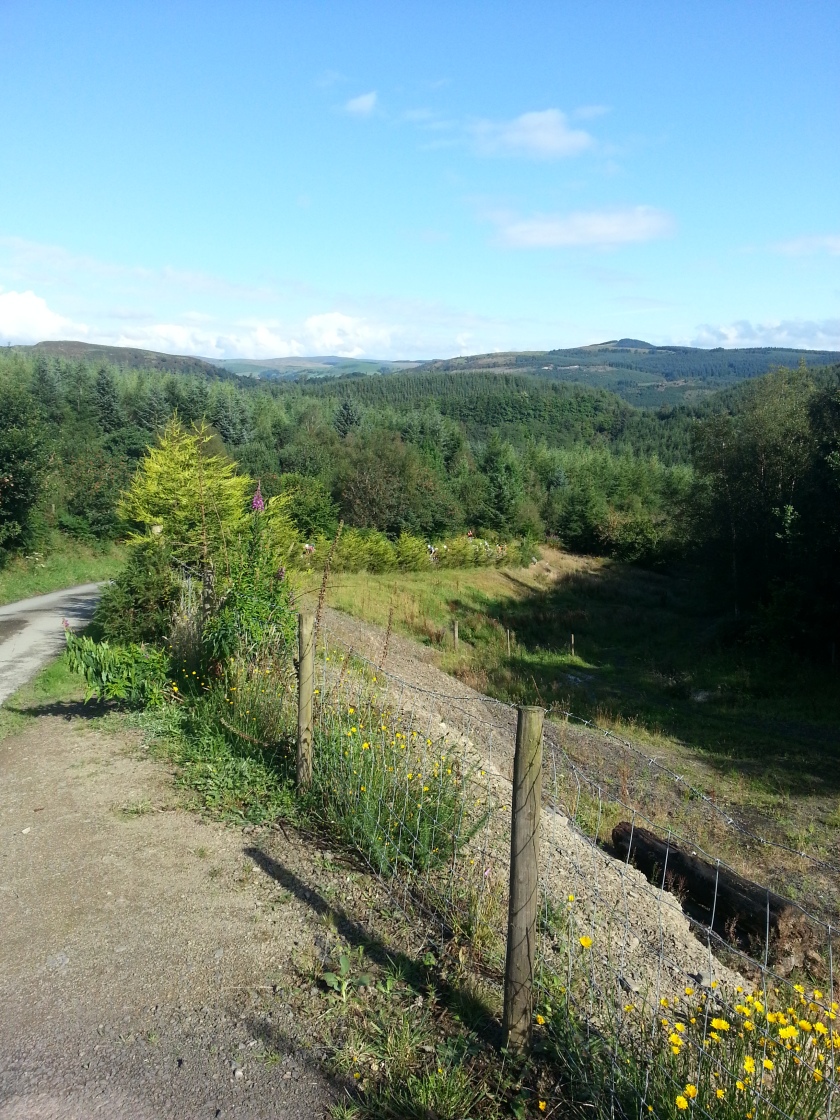 Some of the views today were stunning. 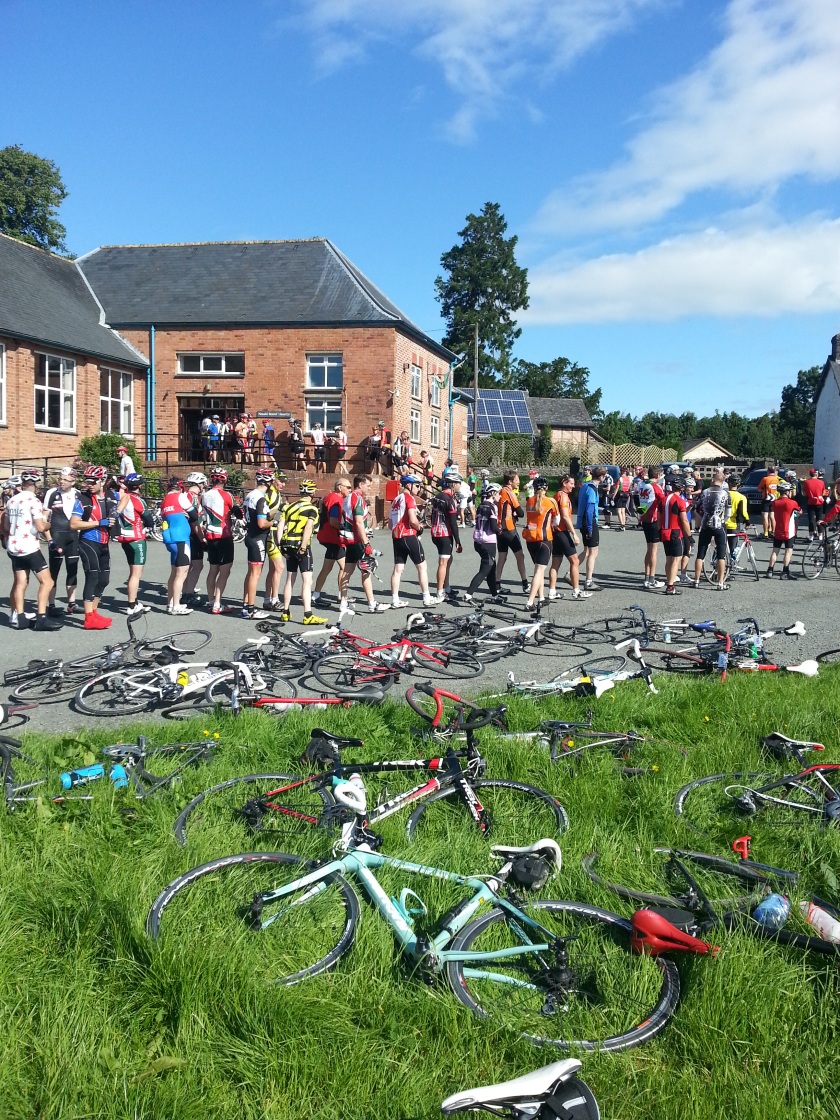 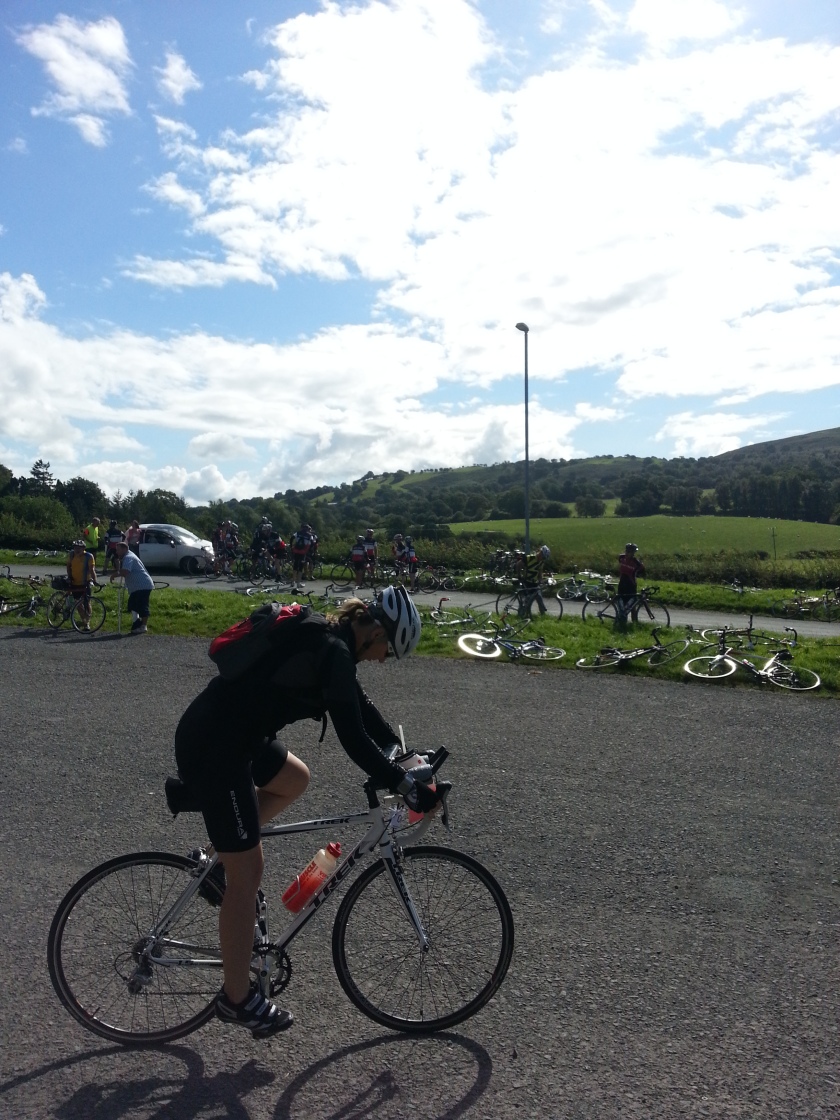 the valley below you could see the sheep running around the purple heather. 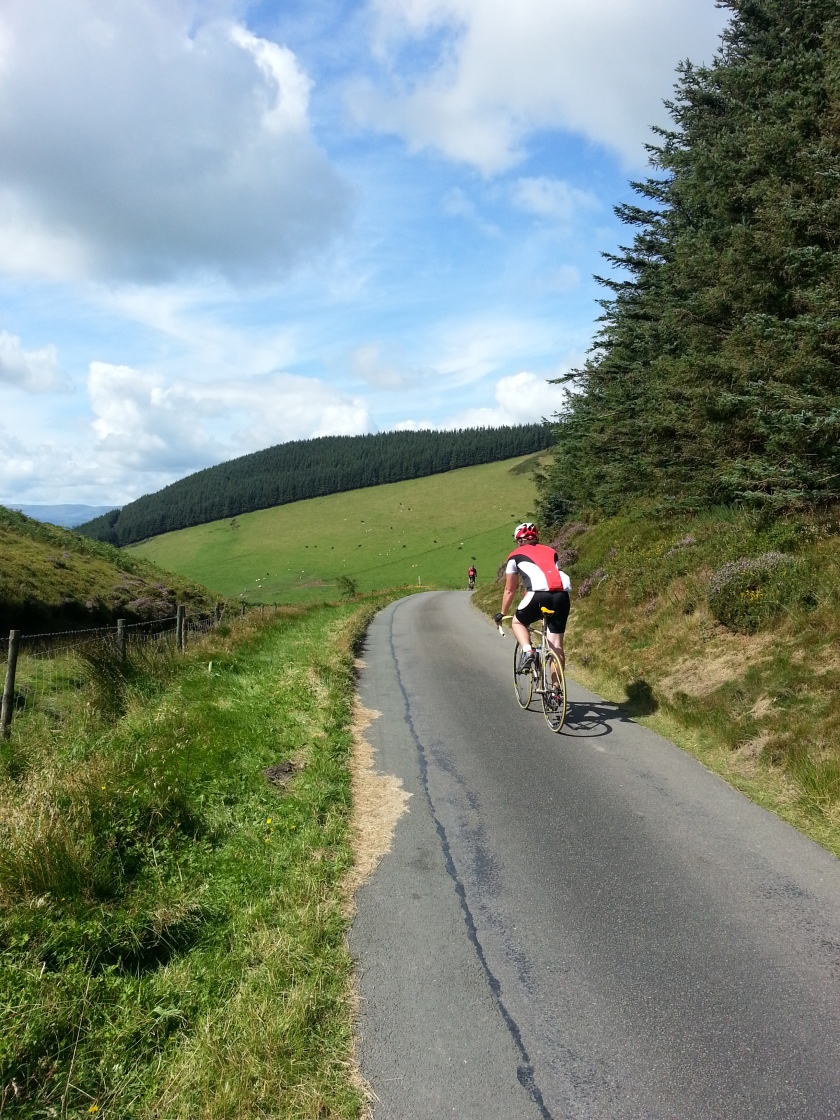 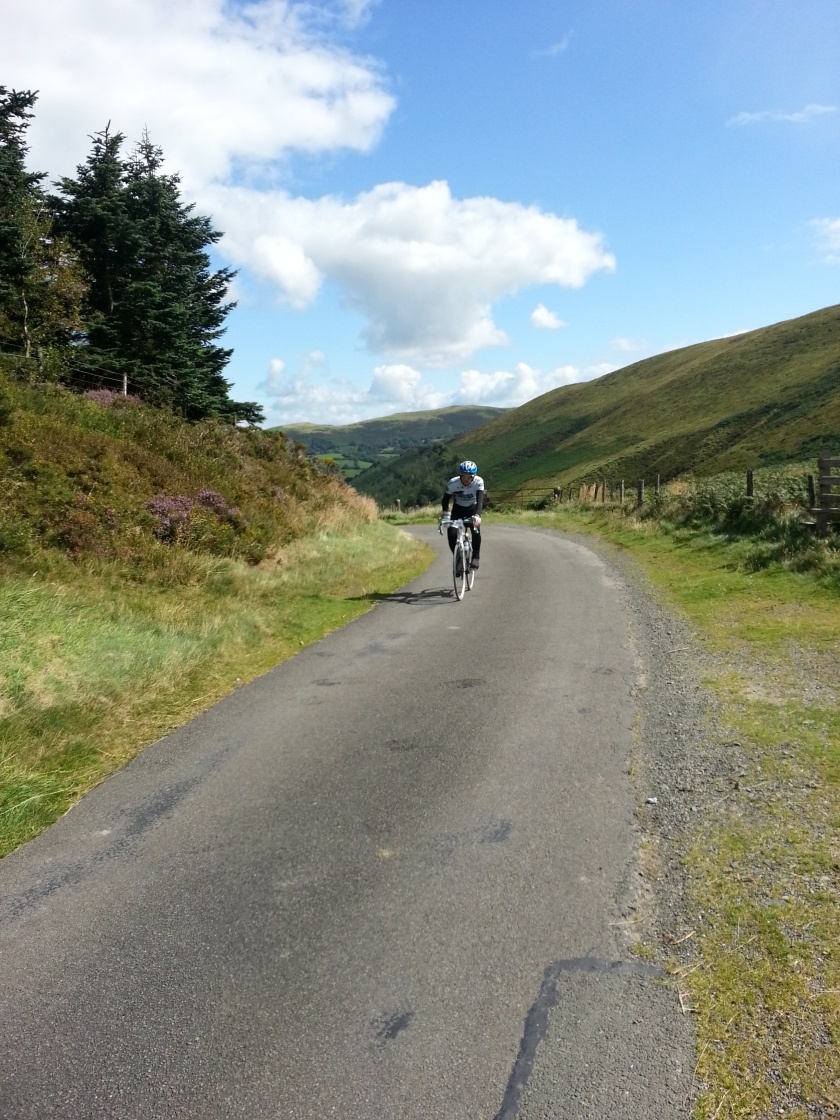 Another missed photo opportunity were the 3 Model T Fords along the route.
Someone had a support vehicle following them around the ride, all well and good but where’s the challenge? The annoying part was having the same car come past you on narrow climbs 4 or 5 times with me being a soft sod and stopping to let it pass.

There was a stop at Machynlleth for food and drink with riders emptying the shelves of the Co-op of water. The shop manager coming out with a plastic bag to put the empty or not so empty bottles in. 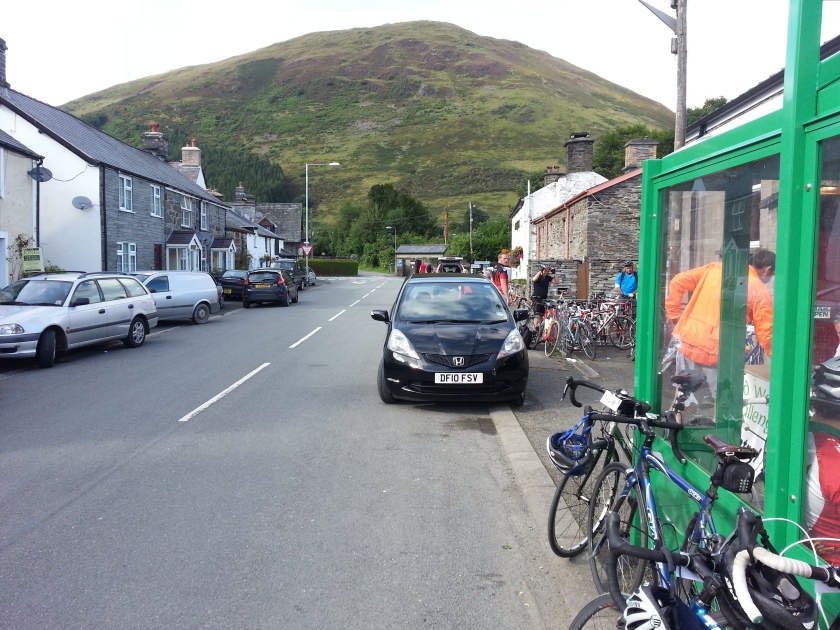 Dinas Mawddwy stop had no queues and the card reader had packed up so it was a manual checkin with the main event a few miles down the road. 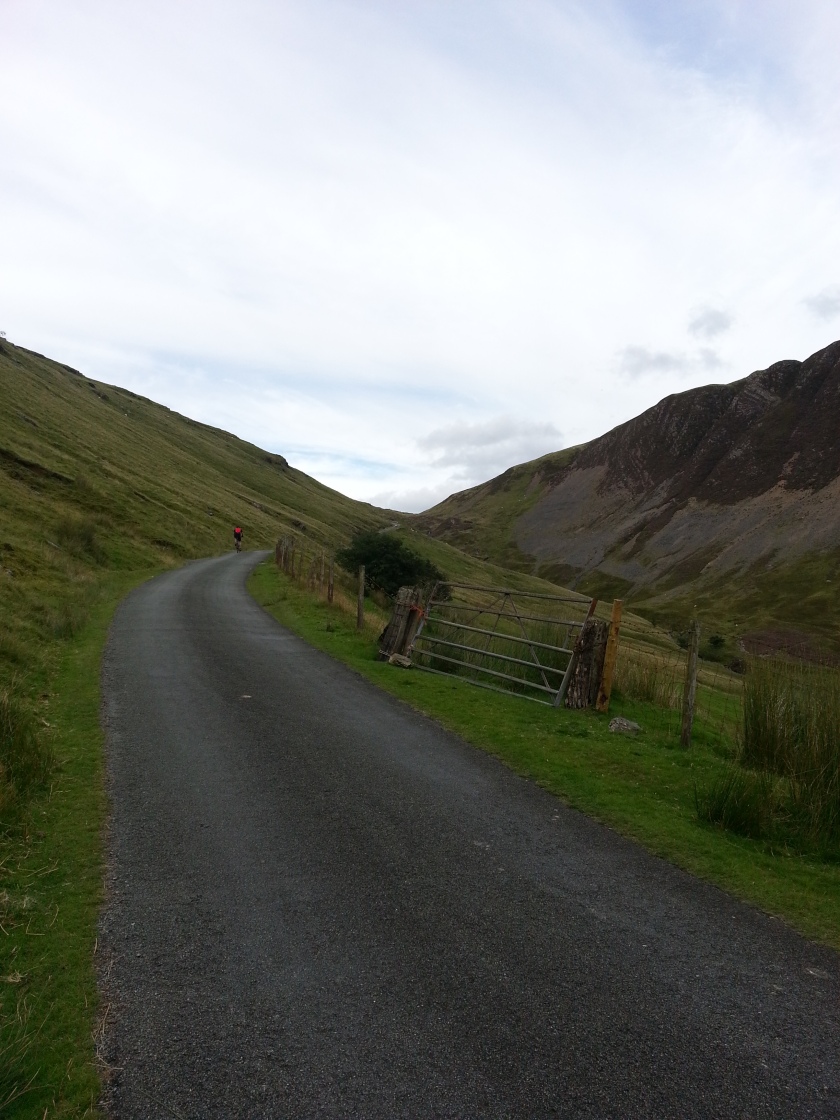 This climb is relentless the easy bits can be 18% with the Sunlight telling me it’s 29% at the top which is where the armco starts. 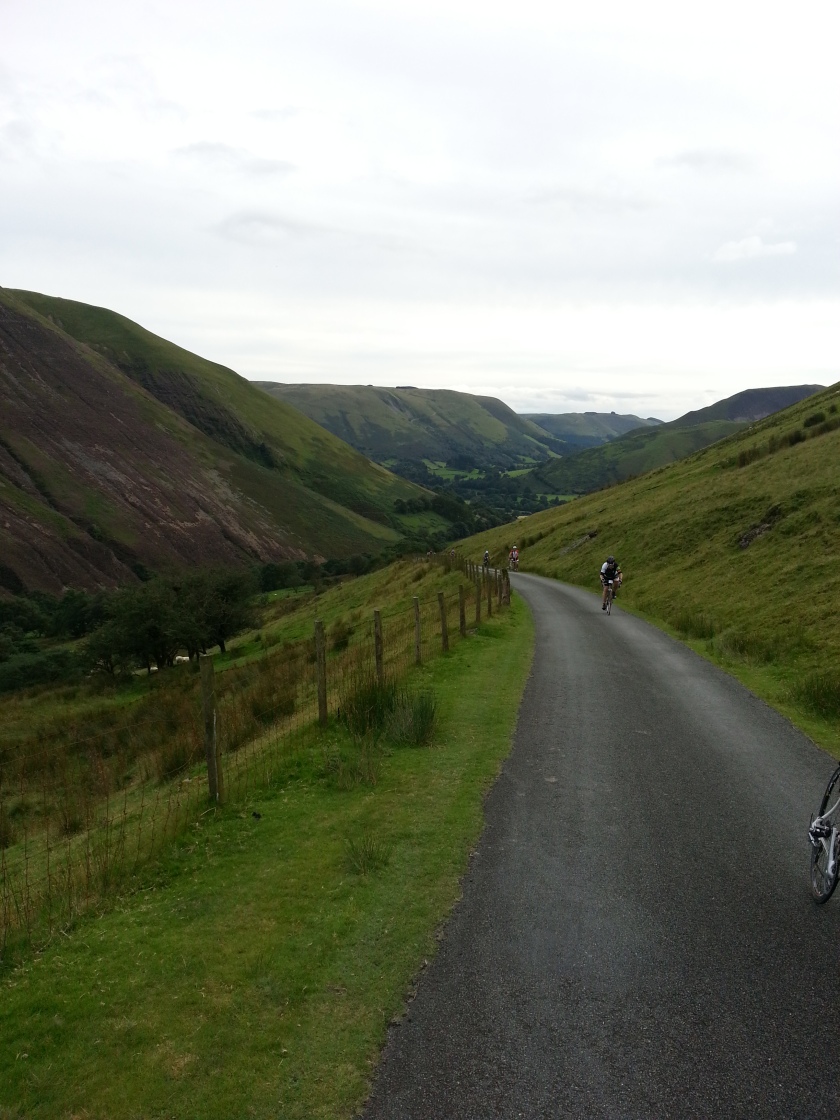 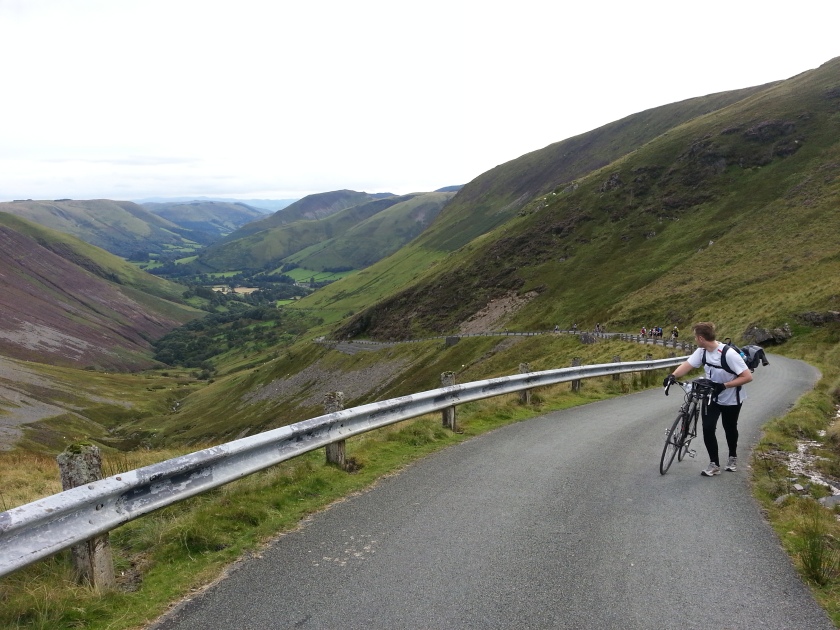 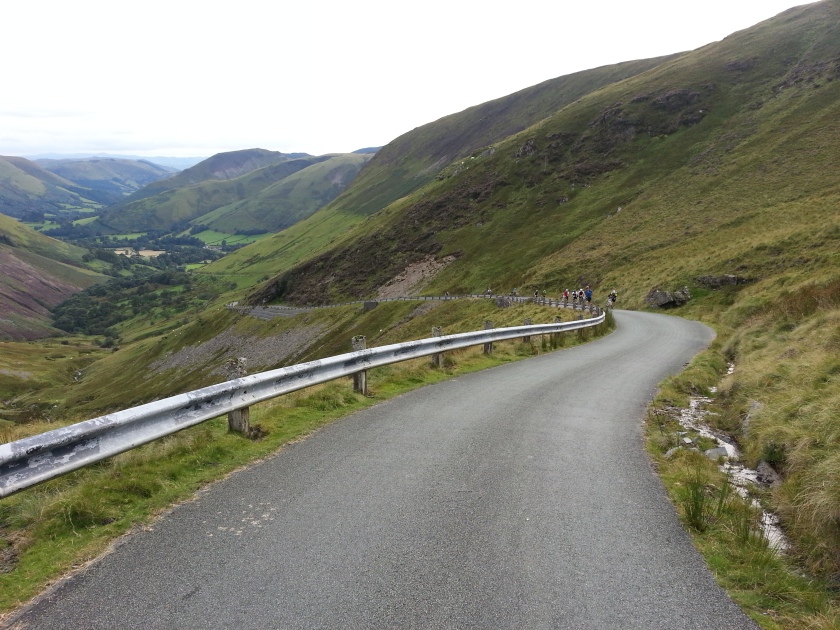 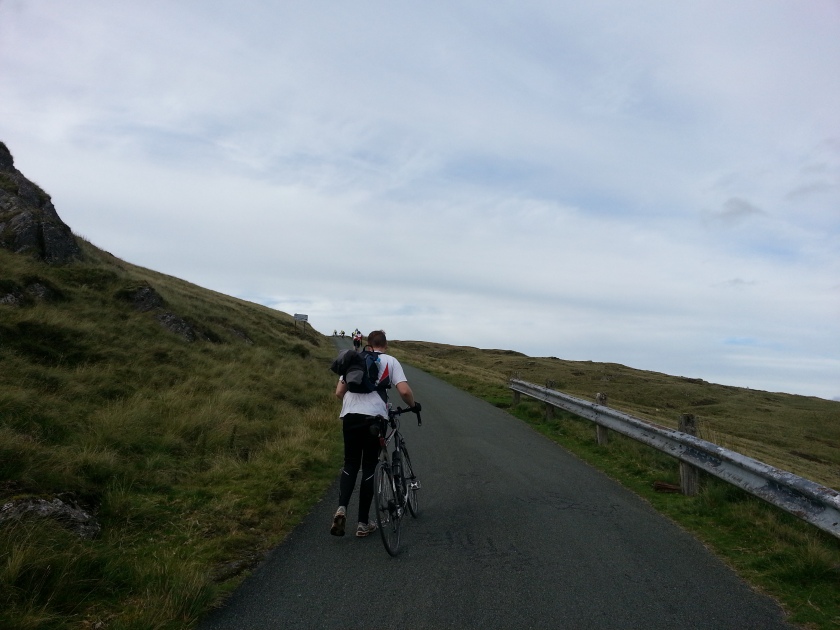 Nothing worse than looking in the sock draw and finding 1 Assos sock, talking of which had a chap fall off in front of me on the Bylch who was wearing one fluro pink one and fluro yellow/green one and they were long to boot more like legwarmers.

Ancient capital capital of Wales no less, you learn something every day. Thinking back there was a chap on a recumbent trike , mountain bikes were more suitable at times or at least the gearing.

Wolverhampton wanders no Wheelers won the team prize with 39 riders turning up.

Great video from Alan of the ride, great site too.