If you think things have been going good for me lately you’ll understand how blown away I was by tonights ride. I’d spent the day sorting bits of the site out as I’ve been blogging for a year now and doing a bit around the house. The Toy had it’s rear wheel changed for the Race X lite which proved to be only 50g lighter. I didn’t get around to changing the front wheel.

It looks like it is about to rain so I wear the Discovery Channel windshell on the ride out to the start. The route 56 is being resurfaced in parts and there are plenty of loose chippings on the resurfaced parts. Bob is at the start to do the timing with another two riders, Miles and Alex, Alex is doing it for the first time and has a copy of my last Time Trial Route from Motion based that he has printed out. It’s a small world.

Well you could knock me down with a feather at what happens next. The man himself turns up on his time trial bike, Steve Cummings, Discovery Channel rider is riding the same event. Now I’ve been living the dream since I bought “The Toy” and you may have gathered that I’m a Discovery Channel wannabe. I’m a big fan of the team but to ride against one of their riders on a local event is a once in a lifetime exerience. 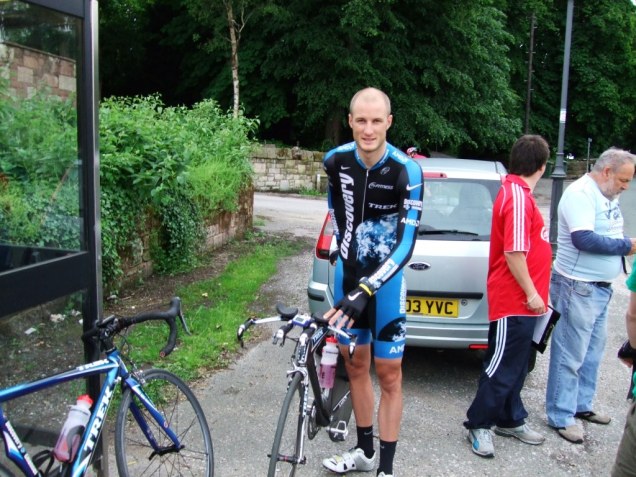 Miles makes a comment about it being a Discovery Channel time trial, it’s a classic, there are only four of us riding the event and Alex manages to get lost. Thanks for the picture Steve, you’ve made my day, week, year. I’ve been riding Steves Training ride for the last few months and I agree that it’s a nice ride, who am I to argue.

Alex gets set off first and doesn’t hang around for his first event. Miles is next up and then it’s me. 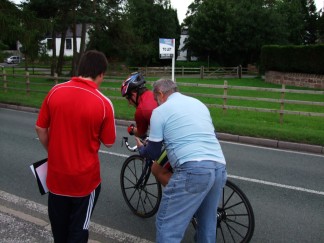 I spoke to Steve before I’d set off about what what I’d been up and that I’d bought the Trek before he had signed up for Discovery as Trek don’t have a weight limit on their bikes.

You’ve all read this site and can imagine what is coming up next. Two years ago I was a morbidly obese couch potato and tonight I’ve got an Olympic medalist one minute  behind me. We all make mistakes and tonights was being in the wrong chainring for the start, I should have been in the big ring. It was soon sorted and I was on my way up to the Clegg Arms at what seemed like a faster pace than my first.

Now I’ve got two sets of data to overlay for this course now and I’ll do it in due course. Two miles into this course Steve passes me, he has already taken a minute out of me. Now I know I don’t have the wind behind me on the top road this time and my top speed seems to be down. Steve is gone, its as simple as that. Anyway I’m still having a good ride but this time ease off at the traffic light filter lane at the Aldi Depot traffic lights.  The other mistake I had made was I hadn’t selected Map View on Course mode, this would have told me if I was behind myself on my first ride.

I should have whipped the camera out and took a picture of Steve passing me too, but you can’t have everything. I see 16 mph by the Seven Stars this doesn’t look too good. Just after the roundabout at Thornton Hough to Raby Mere I see Steve coming the other way. This guy is awesome, probably the reason he rides for Discovery Channel and I try to emulate anything he does. More later I need to go to bed. Stunning day, I won’t forget this for a long long time, rode back with Miles chatting about what I had been up to. Hope you find the site Miles, it shouldn’t be too hard.

The map player on motion based looks good but the anlyser for subscribed users is some thing else. What next I wonder.