Yet again I started out on the wrong bike, I should have rode on the winter training bike with spd pedals and mountain bike shoes. It wasn’t too bad when I set out, blue sky with the odd woolly cloud so “The Toy” got wheeled out instead. Left it a bit late too so it was full speed ahead to the Eureka Cafe to get my breakfast before the ride started. Tis was aided by one of the tunes from the previous evenings spinning class bouncing around my head.

I’m still getting comments about the breakfast so I’ll say it again “I have the breakfast EVERY time I walk through the door of the Eureka Cafe” I’ve done a post about. It’s part of my diet and the only fat on it is the bacon and that gets cut off.

Now that I’ve got that over I’ll get on with the ride. There were 45 in the cafe and by the look of it no one wanted to set out in the cold. Things stirred and next minute there are fair few of us outside getting ready for the off. 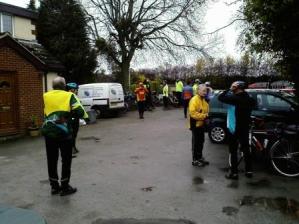 The usual suspects set off towards Capenhurst lane and we had Mike along for a second time. Last weeks ride not putting him off. We were relagated to the back as we had no mudguards on or we just might have been slow. As we chatted at the back of the bunch the conversation got around to the merits of ACE Inhibitors versus Beta Blockers. That and heartrate. You can see all the data I gather on the rides on the MotionBased site if you look hard enough.

Margaret and husband left us at the A56 Warrington Road along with the chap I talk to who has the magnesium framed bike. There were six of us left, the two Johns, Jill, Brian (I think) Mike and Moi. The weather had been ok until we crossed the Tarvin road  there was a bit of a biting headwind there and a bit further on it started to drizzle. It was time to don rain gear at the Plough Lane crossroads.

Ellevenses were at a Cafe in the block of shops at Waverton. Tea and a flapjack for me. There were two guys in there having the breakfast, it was literally two heart attacks on a plate. While we were in there I had a look at the free mag that was on the table, there was an advert in it for the Abbey Arms (a ride I did a few weeks ago) apparently it,s a Hungry Horse pubchain. Five course Christmas Dinner for £32. Probably served on those 17 inch plates. It’s no wonder the country has a weight problem.

I didn’t want to leave the cafe as it was pouring down, the gutter of the one stop shop was leaking a steady stream of water over “The Toy”.  We retraced the route to Plough Lane and the next stop was the Dunham Arms.  The Aldi Winter Gloves aren’t waterproof (I expect too much for £2.99) and my hands were freezing, the roads are awash and the decision to go out on a bike with no mudguards is really making itself felt. And not for the first time!

After about 7 miles we arrive at the Dunham Arms, cold and wet in my case. Other groups have taken probably a more direct route and arrived there before us. All told there are 20 of us that have ridden out to the pub, there are no other customers that I could see.
I ordered a jacket potato with chicken strips which came with a salad. When it arrived (which was quite soon) it was so well presented I took a picture of it. What caught the eye was the cherry tomatoes sliced in half and placed centrally on the cucumber slices. All the food  seemed to be of a similar high quality.

It was too much to expect my gloves that had been placed on the radiator to be dry before we left. So now I am looking around for a waterproof pair, and the way its getting colder by the day they might well be mitts.

It was still raining when we left and headed down Hob Lane  but as we headed down the hill the rain eased off. Stanlow oil refinery was in the distance and the next thing you know we are following the reverse  of the route we took on Rememberance Sunday.
For some unknown reason  my hands are now ok, still wet but not freezing. It’s my feet that are now cold, the Aldi Winter Overshoes secumbing to the stream of water that the unguarded  front wheel directing at them. We are soon going back down Capenhurst Lane towards the Eureka Cafe. At the junction by the Ostrich Farm I sprint off the front hoping to secure a photo of the group returning to the Cafe. It was to no avail, although I reached 28 mph on my dash to the Cafe, by the time I had parked the bike and rushed out on to the road my hand were too cold to operate the camera in time. An opportunity lost but still it was worth giving it a go.

After a cup of tea and another card for the site given out it was back home along the Chester High Road and back through Willaston , Thornton Hough, Route 56 and back up Rest Hill. It was a good day out, the weather was terrible, but I’ve still had a good time, my whingeing was all self inflicted. 100 lines ” I must not go out in winter without mudguards”

The map opens up in a new window, click on Hybrid view for a satellite overlay.

Link to Google map of CTC ride to Dunham Arms